Current excitement about a "Blue Wave" of Democratic wins in November is, I believe, woefully misplaced...for the simple reason that the wealthiest Trump supporters (inclusive of Vladamir Putin) will use every underhanded tool at their disposal to prevent or reverse any Democratic victories they can. What these powers-that-be care most about is winning by any means possible - they will lie, cheat, steal, harass, sue, bully, intimidate and hoodwink in order to hold on to their political influence. How do we know this? Because we've seen it in many recent local and national elections:

2. Relentless disenfranchisement of Democrat voters, the poor, people of color, etc. and/or preventing them to vote on election day.

3. Aggressive attempts to hack into all levels of the election process, and the DNC, in order to disrupt free and fair elections.

6. Threats, intimidation, fear-mongering and punitive policies from the White House itself to further disrupt and divide the Democratic base.

8. Invented or manufactured crises that are then shamelessly blamed on Democrats.


So why should anything be different in 2018...and what other tactics can we look forward to? Court challenges for any election outcomes or lower court rulings that don't favor Republicans? Sure, with a new far-Right Supreme Court Justice on the bench, this will almost certainly be a tactic.

In the past, the only thing that has consistently countered such nefarious "win-at-all-costs" Right-wing strategies on a large scale has been a broad upwelling of authentic populist grassroots excitement for a given candidate or agenda. This is what propelled Obama to his initial victory, what energized Bernie's rise to prominence, and what promises to undermine the centrist DNC status quo as it did with New York's election of Ocasio-Cortez.

But we should always keep in mind that whatever has worked previously to elevate the will of the people into our representative democracy will always be countered by new deceptions, new backroom dark money dealings, new astroturfing campaigns, and new methods of hoodwinking by those on the Right who want to destroy our civic institutions. Nothing on the Left can compare - in scope or the amount of money spent - to how the Koch brothers coopted the Tea Party, how the Mercer family funded Breitbart and manipulated social media through Cambridge Analytica, what Rupert Murdoch accomplished with FOX News, or how the Scaife and Bradley foundations fund fake science to weaken or reverse government regulations. Billions have been spent to deceive Americans and create "alternative narratives" that spin any and all public debate toward conservative corporate agendas. And when the Supreme Court upheld the "free speech" of corporate Super PACs funded with dark money in its Citizens United ruling, that just opened the floodgates for more of the same masterful deception.

So don't count on a Blue Wave to save us from a truly deranged Infant-in-Chief and his highly toxic agenda. Civil society - and the checks and balances of power for the U.S. Republic itself - will very likely continue to be methodically demolished and undermined by neoliberal plutocrats. I wish this was mere pessimistic speculation…but I really don't believe it is. As just one example of the effectiveness of these sneaky destroyers of democracy, consider how well-organized, well-funded, and effective the "science skepticism" of the past few decades has been. Take a few minutes to absorb the graphic illustration below, and then ask yourself:

1. Do we have caps on carbon emissions, and the necessary investment in green energy technology to replace fossil fuels, to avoid further escalation of climate change?

2. Have neonicotinoid insecticides been banned so essential bee populations can be saved?

3. Has the marketing of nicotine vaping products to teenagers been stopped to prevent them from lifelong addiction and health hazards?

4. Has the proliferation of GMOs been seriously slowed until we can better understand its long-term impacts?

5. Do a majority of Americans even believe any of these issues are even an urgent concern…? 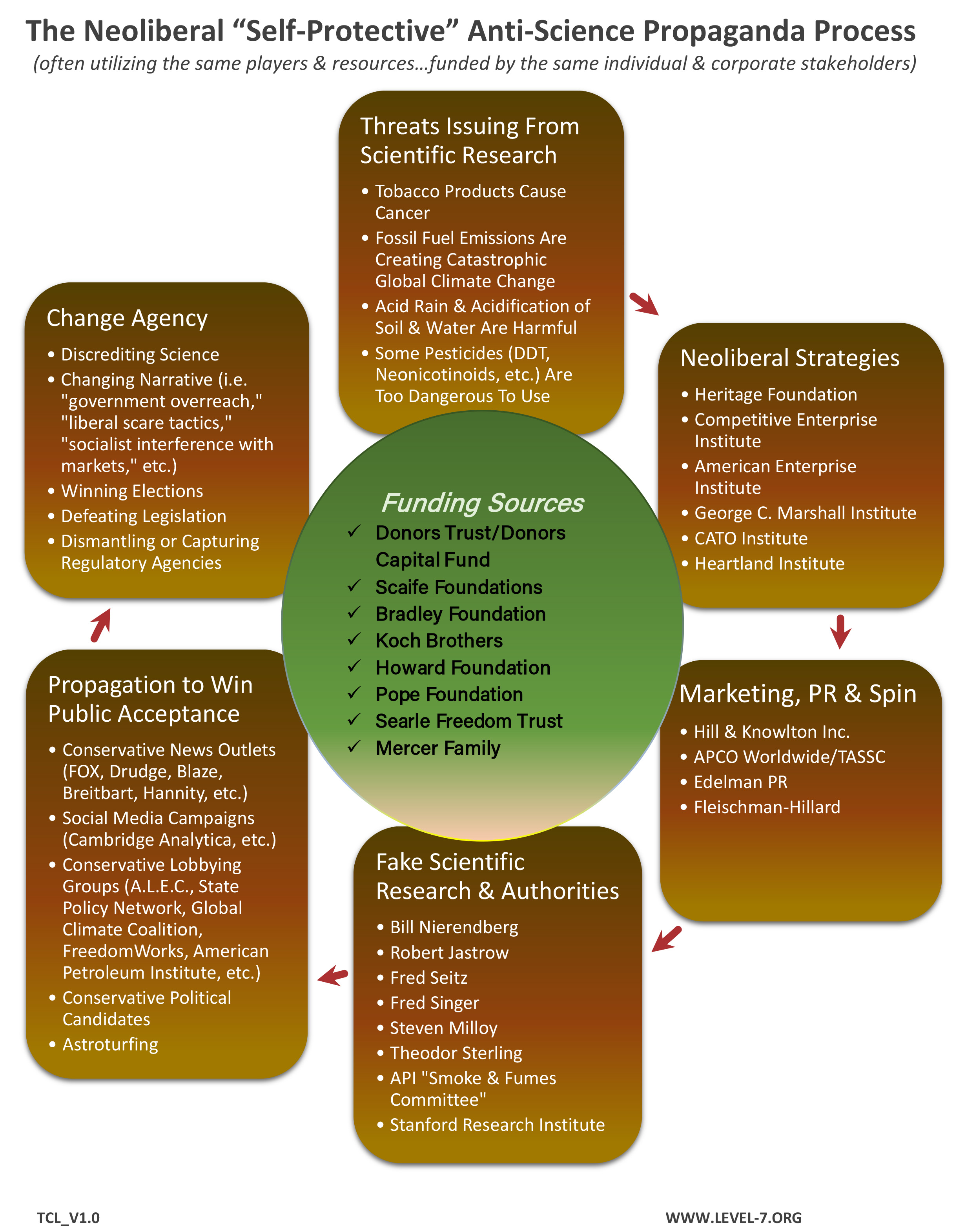 Along the same lines, how good are working conditions at the largest U.S. companies? How high are those worker's wages? Will Social Security be able to pay 100% of benefits after 2034? Are wildly speculative investments on Wall Street being well-regulated? Are U.S. healthcare costs coming down? Are CEOs being held accountable for corporate malfeasance…and if so, how many have actually gone to jail?

The answer to these and countless similar questions informs us about the direction the U.S. is taking, and how nothing that interferes with corporate profits or the astounding wealth of their owner-shareholders will be allowed to flourish as long as conservative Republican (and possibly even centrist Democrats) hold power. In short, elected officials friendly to corporatocracy need to keep getting elected to keep this gravy train in motion. And so there is no cost too great to expend in order for them to win, and the highest concentrations of wealth in the history of the world have brought all of their resources to bear to perpetuate those wins. This is why a Blue Wave alone cannot triumph in November. Perhaps, if every single Left-leaning voter - together with every single Independent-minded voter - comes out to make their voices heard at the ballot box, it just might make enough difference. And I do mean every single one. But a Blue Wave alone will probably not be enough. In effect, what America requires for a return to sanity and safety is what we might call a Blue-Orange Tsunami - perhaps even one with a tinge of Purple, where Independents, Democrats and the few sane Republicans remaining unite their voices and votes against a highly unstable fascistic threat.

Short of this, there is just too much money in play, carefully bending mass media, social media, news media, scientific research, legislators, election systems, judges, government agencies, public opinion and the President himself to its will.