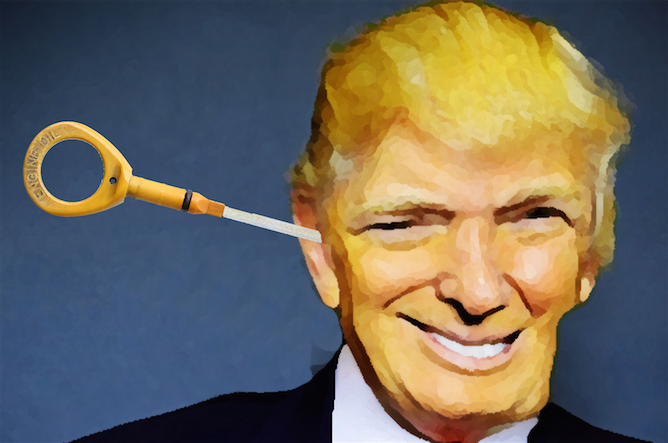 "Don't Be A Dipstick"

After watching the second Presidential debate last night I finally realized what makes Trump attractive to so many people. There are countless ways to describe the phenomenon, but I think a lot of the language is either inaccessible to modern sensibilities, or perhaps too casually dismissed by them. Culturally, probably as a consequence of postmodern skepticism and doubt, we have simply forgotten what certain kinds of evil look and sound like – and why they can be so seductive. And I think this is one reason why nearly half the U.S. electorate has fallen under Trump’s spell. Allow me to illustrate what I mean with some quotes from a previous time – a time when it was still considered “politically correct” to view the world in terms of good and evil, or darkness and light.

A worthless person, a wicked man,
goes about with crooked speech,
winks with his eyes, signals with his feet,
points with his finger,
with perverted heart devises evil,
continually sowing discord

There are six things that the LORD hates,
seven that are an abomination to him:
haughty eyes, a lying tongue,
and hands that shed innocent blood,
a heart that devises wicked plans,
feet that make haste to run to evil,
a false witness who breathes out lies,
and one who sows discord among brothers.

A fool takes no pleasure in understanding,
but only in expressing his opinion.
When wickedness comes, contempt comes also,
and with dishonor comes disgrace.

A fool’s lips walk into a fight,
and his mouth invites a beating.
A fool’s mouth is his ruin,
and his lips are a snare to his soul.

A rich man’s wealth is his strong city,
and like a high wall in his imagination.
Before destruction a man’s heart is haughty,
but humility comes before honor.

“For out of the abundance of the heart the mouth speaks. The good person out of his good treasure brings forth good, and the evil person out of his evil treasure brings forth evil. I tell you, on the day of judgment people will give account for every careless word they speak, for by your words you will be justified, and by your words you will be condemned.”


In modern parlance, we tend to view destructive forces and habits more psychologically. In Trump's case, that he is obsessed with enlarging his own ego, or that he has Narcissistic Personality Disorder, or that he is stuck in an early stage of social and moral development, or that his inherited wealth has allowed him to maintain various self-aggrandizing delusions, or that emotional abuse at an early age has made him mean and vindictive, or simply that he has spent so much of his life satisfying his most base and animalistic impulses that he is now wantonly compelled to keep doing so. And these may be ways to frame parts of his behavior – and indeed they may have contributed to Trump’s corrupted condition, opening the door to the deeper currents in play. But I think there is clearly also a spiritual archetype involved that should not be ignored. There is real “evil” at work here – not just a bad-boy persona run amok, but a force intent on perpetuating and amplifying chaos, destruction and death by any means possible. And a bullying hater with daddy issues is a perfect collaborator and vehicle for this agenda.

This is, I sincerely believe, one reason why so many people are drawn to Trump. He has the age-old allure of the Rapacious One – exciting us with his passionate vitriolic invective, distracting us away from his faults and failings by aggressively attacking those around him, casually shrugging off the hurt he has done to others, dissembling and deceiving as easily as breathing, stirring up fear and resentment to serve his own ends, surrounding himself with people who are hungry for hate and blame, and doggedly propping up his own self-importance. Anyone can be drawn into this glamor, but particularly those who lack discernment, or who have numbed themselves to the darker impulses of human nature. As an embodied archetype, their have been many "Donald Trumps" throughout history, always striving for the same aims: To pull as many people as possible down into a maelstrom of vicious loathing and spite, to excite them with prideful arrogance and a writhing lust for vengeance, and to saw away at the foundations of civil society itself in order to amass more self-serving praise, attention, mammon and power. In the sense that “pride goes before a fall,” Trump is greedily herding as many followers as possible off that cliff with him.

Be not envious of evil men,
nor desire to be with them,
for their hearts devise violence,
and their lips talk of trouble.

A wise man is full of strength,
and a man of knowledge enhances his might,
for by wise guidance you can wage your war,
and in abundance of counselors there is victory.
Wisdom is too high for a fool;
in the gate he does not open his mouth.
Whoever plans to do evil
will be called a schemer.
The devising of folly is sin,
and the scoffer is an abomination to mankind.

“Why do you not understand what I say? It is because you cannot bear to hear my word. You are of your father the devil, and your will is to do your father’s desires. He was a murderer from the beginning, and does not stand in the truth, because there is no truth in him. When he lies, he speaks out of his own character, for he is a liar and the father of lies.”

Folks, the Donald Trump archetype is what seductive evil looks like. Plain and simple. We have either just forgotten how to see it clearly, have softened our convictions about the persistence of such archetypes, or we are deluding ourselves…almost as much as we are being deceived. There is perhaps no clearer evidence of this than a widespread pattern: The same people who devoutly suspect Hilary Clinton of nefarious dealings and a lust for power will embrace Donald Trump who transparently and boastfully celebrates these same traits in himself. In recognizing this – and, in particular, perceiving the bent and deceitful will of Donald Trump so clearly during last night’s debate – I felt additional shards of worry pierce my well-being. Remember how easy it was to laugh off this absurd buffoon when he first started running for POTUS? Remember the chagrined disbelief when Trump won the Republican nomination? Remember being stupefied – and perhaps even a little impressed – by how effortlessly Trump continued to dodge all criticism and accountability? Or the growing incredulity as his polling numbers remained so high and his supporters so loyal, despite one revelation after another about his casual cruelty, brutish appetites and banal character? This is one way such evil succeeds – by encouraging our skepticism that it has any real influence or chance of winning; by glossing over all incompetence, ignorance and discrediting facts with pompous bluster…while maintaining the illusion of strength as it thrashes past the finish line. When I shared my reflections with my wife Mollie this morning, she said “I thought evil would be smarter.” Indeed, didn’t we all?

“It is funny how mortals always picture us as putting things into their minds: in reality our best work is done by keeping things out.”
― C.S. Lewis, The Screwtape Letters

In terms of our response, I think we can return to the same wisdom traditions for insight. We can stand up to evil, call it out for what it is, and press it back into the dark crevices from which it sprang. Those skilled to do so can also radically embrace the Shadow - healing and integrating its pain with compassionate affection. In either case, drawing courage from the Light, we are no longer swayed by fear.

If you faint in the day of adversity,
your strength is small.
Rescue those who are being taken away to death;
hold back those who are stumbling to the slaughter.
If you say, “Behold, we did not know this,”
does not he who weighs the heart perceive it?