Obviously this short post won’t persuade anyone currently in the thrall of active lemming events, as these collective memes are highly resistant to contrary evidence. In fact we could say that one of the chief characteristics of such movements is their promotion of habitual confirmation bias and an extremely high tolerance for cognitive dissonance. But I’m getting ahead of myself.

Probably the easiest way to appreciate parallels between the way pot fanatics, gun fanatics and Trump supporters think is to chart out some of their more exaggerated claims. And by “exaggerated” I simply mean without sufficient basis in fact to be embraced as accurate; that have too little supportive evidence to reveal any causal relationships; and that are essentially non-rational ideas living mainly in the imagination of their proponents. Some examples: 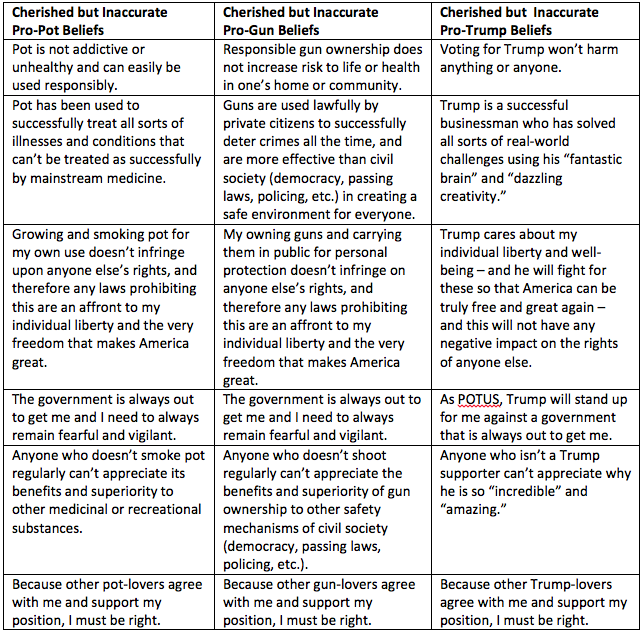 I could of course spend a few hundred pages documenting why the beliefs of each group are “inaccurate,” and perhaps I will expand this into an essay at a later time to do just that. However, there is a much easier approach, which is to challenge proponents of pot, guns and Trump to produce supportive evidence for their claims. I have done this on countless occasions, with invariably reliable results: they can’t. Instead, I will hear statements like these in response – often using exactly the same wording – from each group:

“Well the government suppresses all the good data about this. They don’t want anyone to know the truth.”

“I know there’s really good research that proves what I’m saying – I just can’t remember what it is right now.”

“I don’t trust those kinds of academic studies. They get proven wrong all the time.”

“If you’d seen what I have seen, you’d know what I’m saying is true.”

“You don’t understand what’s at stake here. This is much bigger than facts.”

“The proof is all over the Internet. You just have to look.”

“Everybody knows this is true. I’m surprised that you don’t.”

And so on. And even when a seemingly reasonable piece of favorable research surfaces (such as John Lott’s work on crime stats and gun ownership), it quickly turns out that the research methodology is flawed, and that countless other studies have come to different conclusions using the same data.

So what is happening here? From the perspective of Integral Lifework, explanations are fairly easy to hypothesize. Human beings want to have more personal agency; long for acceptance and community; are understandably overwhelmed by modern complexity and seemingly contradictory information all around them; are angered at being used and manipulated by forces beyond their control; feel out-of-sync with the rapid pace of change around them; and often make impulsive emotional decisions in reaction to all of these antagonistic variables. It’s perfectly understandable. In response to the many demands, pressures, stresses and inequities of the modern world, well-meaning folks will rely on purely emotional reasoning to react or choose a course, then seek solace and support in like-minded communities. And, thanks to mass media, the Internet, and a proliferation of propaganda fueled by both self-serving enterprises (gun manufacturers, pot growers or Trump himself) and fanatic adherents, it has become relatively easy to energize and maintain blindly conformist mass-movements…as long as you keep things emotionally charged and the facts a bit fuzzy.

I should interject here that it isn’t entirely fair to label this kind of reflexive-groupthink-adherence as “idiotic” or “ignorant.” This observation is an understandable one – and one I myself have sometimes slipped into out of exasperation - but it’s a bit unfair. Why? Because it is much more likely that the aversion to critical thinking among these groups issues from genuine insecurity, anxiety and ongoing suffering. As human beings, we need community, we need a purpose, we need to feel useful and connected and important. In fact, these are essential dimensions of nourishment in the Integral Lifework model. And when we suddenly find ourselves part of a movement that energizes our being in these dimensions (and perhaps for the first time), it is very difficult to step back, take a breath, and critically assess the validity of our trajectory. And this is especially true when our fundamental needs have not been met for years or decades – when we have been deprived, distracted and anesthetized away from taking good care of ourselves by a mainly consumerist, externalizing and infantilizing model of well-being.

What is the solution? Alas, in the short term, we’ll probably just have to ride each of these populist waves to their unpleasant conclusion. History seems to indicate that only when folks are allowed to obtain what they think they want, then realize it isn’t providing the expected result, will they become open to alternative approaches. And even then, we humans have a tendency to commit ourselves to one ill-considered path after another until we eventually find our way. Personally I believe we will have to move away from capitalist orientations entirely, with the consumerist model fully exhausted, before civil society can grapple with constructive alternatives to enduring human problems.

In the long term, I still believe there is hope…if we can survive into an era when reflexive groupthink fueled by fear and insecurity infects smaller and smaller numbers of people, until it passes away entirely. In the meantime, we can promote more nuanced and multidimensional avenues of healing for personal confusion, anxiety and suffering. In fact, as humans are meaning-making, self-justifying organisms that relish imitating each other and joining in communal activities, alternatives to more caustic memes must be perpetually generated. Something is required to fill the void. That’s what Integral Lifework practice tries to advocate, albeit one person at a time. But as long as capitalism prevails, lowest-common-denominator mass marketing will continue to promote self-serving, ultimately destructive habits of consumption, where large numbers of people will keep lavishing their personal power, money and passion on ineffective or counterproductive attempts to lessen their fear and pain – options like pot, guns and Trump.